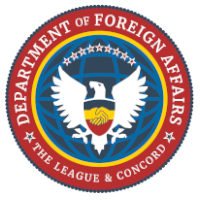 Produced, edited, and compiled on behalf of the Republic of The League by the Department of Foreign Affairs​
General Foreign Affairs Report
Authored by New San Antonio.

Major events in The League and Concord’s since December 1st 2022:

On December 9th long time Director of Foreign Affairs Tirol stepped down from his position due to concerns about real-life obligations and him no longer having enough time for the job.

As a result, December 13th a new Director was appointed, Parthian Union, a relatively newer member to the region who was most known for his contributions to recruitment.

One new member joined the Department of Foreign Affairs this month as a Deputy Director, myself, the person writing this report.

There was no reassignment of diplomats this month.

All reassignments of ambassadors may be viewed here.

The Director of Foreign Affairs at the time of this report is Parthian Union.

Recent times have been utterly groundbreaking for the LDF. In the last few months we have broken a number of internal records and been pivotal to broader defender success.

During the liberation of New Westphalia we had 36 unique at-update liberators access three sieges (61 instances of .here amongst those people), and had a single update attendance of 24 members for the final siege, an organization record. Not long after the operation we promoted Raziel (aka One Small Island) to the rank of Colonel for their dedication.

Eager to capitalize off of this momentum, we have had a number of internal officer discussions regarding rank reform, onboarding reform, and retrospective discussions following recent liberations. So far this has materialized in the form of the establishment of the Eagle Militia and re-naming of several ranks.

Soon after the New Westphalia operation we supplied 23 members to the liberation of The Potato Union and provided critical numbers for defenses against small occupation attempts.

Presently, the official LDF roster lists 46 members, likely to be subject to change due to recent applications and a planned inactivity audit.

The General of the League Defense Forces at the time of this report is New Makasta.

The November 2022 - January 2023 term of the Council of the Republic held nominations in both November and December, the Council is currently composed of a record 26 members and Jammy continues his Speakership from the previous term.

The League currently has more than 700 nations and Concord has passed 400, strong figures for both regions. Endotarting programs have successfully brough our endo counts to 250+ and 130+ for Creeperopolis and Mechanocracy respectively.

The Consulate oversaw the hiring of Parthian Union as the new Director of Foreign Affairs following Tirol's resignation and we look forward to seeing the direction he will take the Foreign Affairs agency in.

In anticipation of major pending gameplay updates the Consulate has overseen additional security precautions in the creation of the Domestic Security Bureau and the appointment of Vice-Delegates to ensure the stability of Concord and continuity of government following the release of the Frontiers and Strongholds update in the near future.

The Office of the Consulate at the time of this report is as follows,

Since the last report, Concord’s has maintained stability despite a site-wide population downturn. Despite this and other military operations, WA endorsements on our regional delegate have remained strong and at a high level, presently 145 (the record for post-update endorsements being 146, indicating a firm stability around high numbers). We also recently congratulated Mechanocracy on 6 months as WA Delegate of Concord.

A special thank you to the 6 (7 if you count Fort Concord) nations from Concord who participated in the liberation of New Westphalia earlier this month, and contributed to the LDF’s (at the time) highest turnout in its history. Of the 6 nations who participated, 5 were volunteers, and 1 was a Private (now Minuteman) in the LDF.

As mentioned in the Consulate report, congratulations to the Council of Feathers and the Southwestern Federal Republic, who under the newly created Domestic Security Bureau, were appointed as Vice-Delegates of Concord. They will help to ensure the stability and security of Concord, especially when the new Frontiers and Strongholds update comes out. The Vice-Delegates and DSB at large have been widely successful, as both VDs have steadily claimed to over 85 endorsements.

The month of Christmas is a joyous month of the year, and the one that has seen many activities within its days.

In terms of gaming and smaller activities, we had Gartic Phone and film events hosted by Paleocacher and a Hearts of Iron IV game hosted by The New Fandom Republic.

Lastly, polls have seen more consistent activity thanks to the efforts of Jack Empire and Anjan Kloss, with the polls that were made this month receiving excellent results. Also, more new nations are consistently integrating into The League thanks to the recruitment program and its recruiters.

The Culture Department is pleased to say the least, and we hope that we'll continue providing and improving to the overall Culture sector of the region.